The short answer is, there isn't really any difference. At least, not if we are talking about the instrument itself. A fiddle is just another name for a violin.

When people use the word violin they are commonly referring to playing classical music. But when people talk about playing the fiddle, they normally mean playing traditional music, in the Irish, Scottish, English, Scandinavian or other styles. These traditions of music are distinct from each other, and an experienced fiddle player can immediately tell the difference between the styles of playing. But they also have shared ancestries, and even shared tunes, although often played in slightly different ways.

Because of the shared ancestry and the sharing of tunes, these styles of traditional fiddle playing also have features in common. They are strongly associated with playing for dancing, for example, and for that reason the tunes, and the style of playing, have a pronounced rhythm and beat. Mastering the subtleties of the different rhythms used in traditional fiddle tunes - jigs, reels, slip-jigs, strathspeys, hornpipes, marches, and others - is a fundamental part of learning to play the fiddle.

Fiddle playing in traditional music - especially in the Irish, Scottish and Scandinavian styles - is also characterised by the use of 'ornaments'. These are extra notes or flourishes that are added to the main tune. They are critical to getting a tune to sound so distinctively 'Irish' or 'Scottish'.

Since the violin and the fiddle are the same instrument, the basics of learning to play - such as holding the instrument, creating a nice tone, playing in tune, and bowing techniques - will stand you in good stead whether you want to play classical violin or traditional fiddle tunes. But if you want to learn to play the fiddle in a traditional style, you will need to learn the techniques that are central to those musical traditions. 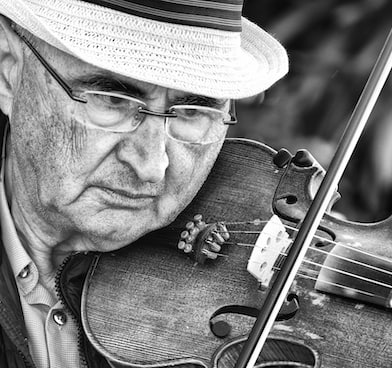 Want to start learning the violin or the fiddle?